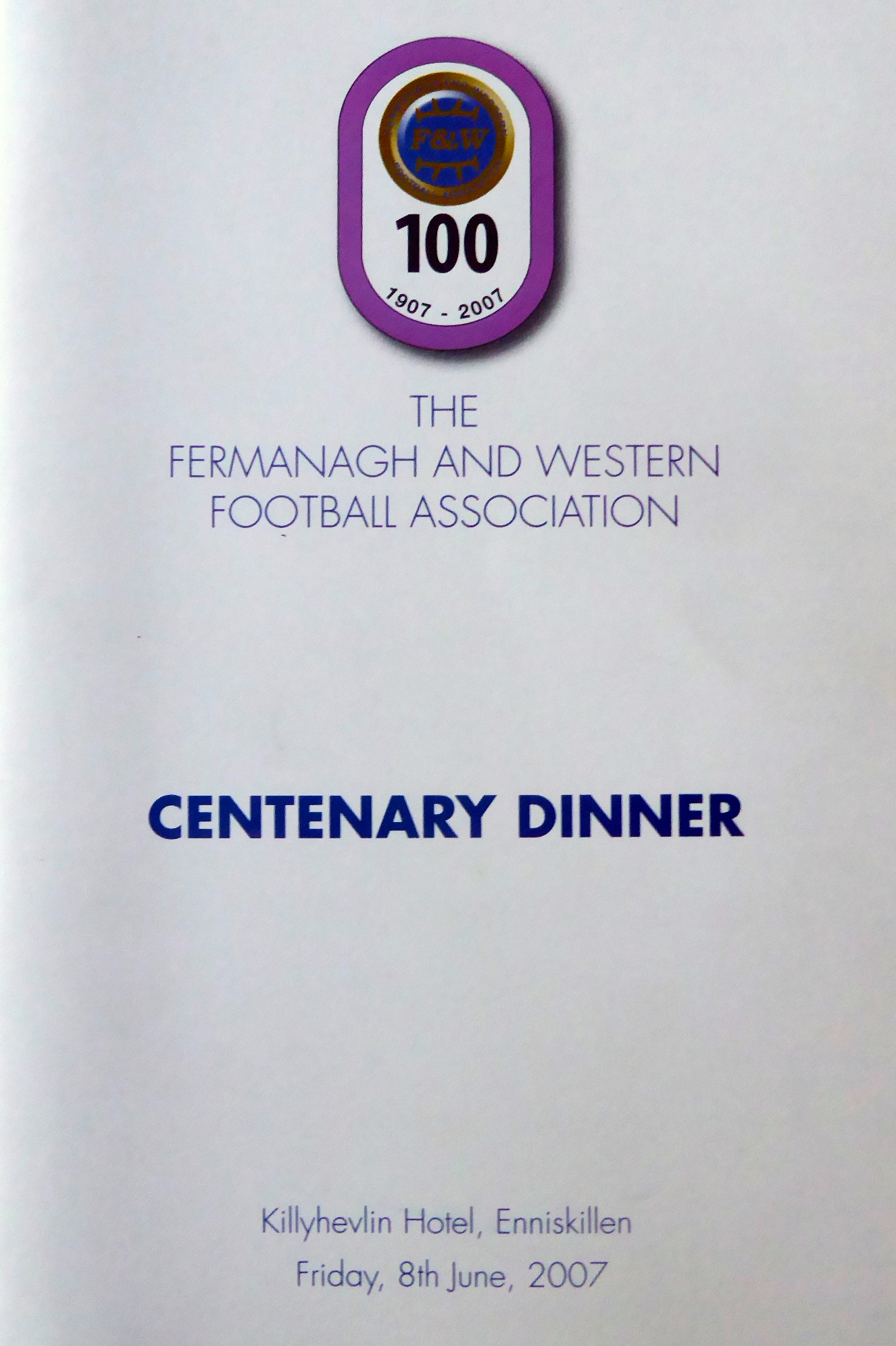 The earliest report of a game of football played in this area under the Association Rules is to be found in The Impartial Reporter in March 1887.  A team from Derrygonnelly defeated a team from Enniskillen by a goal to nil, a result which rather surprised the visitors. The “Impartial” records, however, that “the Enniskillen men do not play Association game:  their forte is Rugby; and in venturing at Association they were no better than novices.”  The following month the Derrygonnelly team arranged a fixture with the Bedfordshire Regiment, played at the Broadmeadow, Enniskillen, where “the ground was in a rather bad state owing to rain.”

A year later, in April 1888, a match between Tempo and Fivemiletown is reported; Tempo, as a result of “gaining a rush and by adroit passing” succeeded in scoring the only goal, despite the visitors’ “excellent dribbling.”

In 1889, two members of the Brooke family played for a Colebrooke which was beaten 4 – 1 by Fivemiletown “before a large and fashionable crowd.”

These early games were, it seems, “friendly” matches, rather than part of an organised competition, though occasionally disputes arose.  A match between Enniskillen Association and Kesh F C in November 1894, for example ended in confusion, the Kesh team leaving the field with fifteen minutes to go, after some “boisterous” play and the award of a goal.  In “Notes on the Game” one of their footballers complains of the Enniskillen team, and says “it would have been much to their credit had they selected a referee who would have given more satisfaction” and “”I think they should learn to play a nicer game.”

In the same column there is a reference to a meeting held in Mahon’s Hotel to “reorganise the Irvinestown Football Club.”

In the new century, football was taking on a more structured nature, with the South Ulster League and the Jackson Cup Competition involving clubs such as Belturbet United, Monaghan Town and Monaghan Wanderers, Cavan and Enniskillen Celtic, sometimes referred to as St Michael’s Hall Celtic, who became the dominant team of the era.  The Clogher Valley League, organised in 1903, only accepted entries from teams based within five miles of the Clogher Valley Railway Company’s line, and thus teams such as Maguiresbridge Lilywhites and their village rivals Maguiresbridge Deadshots, Fivemiletown, Aughnacloy, and Caledon competed for a trophy donated by the Directors of the Railway Company.

The Committee of the newly-formed Fermanagh and South Tyrone Football Association, the predecessor of the current Fermanagh and Western F A, met in Enniskillen in September 1904 to consider entries and the opening round of fixtures played the following month.  The teams for that inaugural season were Moonlighters, Celtic, Enniskillen United, Enniskillen Corinthians, Fusiliers, Lisbellaw, Tempo Freebooters, Derrygonnelly, Omagh United, Fintona and Fivemiletown, and the league was won by Enniskillen Celtic, seven points clear of local rivals Corinthians. Lisbellaw withdrew near the end of the season after a near riot in the village after a game with Enniskillen Celtic.  The referee, Mr O’Kane from Omagh, was attacked after the match by some of the 300 spectators.

The report of Annual General Meeting of the Fermanagh and Western District Football Association held in May 1907 reveals the origins of the current Divisional Association of the IFA.  The Honorary Secretary, Mr J P Gillen, submitted his report which stated that the IFA had been approached with a view to extending the range of the local association to Sligo. The IFA had sanctioned the proposal and arranged a grant of the not inconsiderable sum of £50, with the proviso that the new association was to be absorbed in the North West Football Association.  This was unanimously opposed, and a further proposal was made which was acceptable. Thus the Fermanagh and South Tyrone Association was, “in the third year of its existence, transformed into the Fermanagh and Western District Association, controlling the district from Fermanagh to Mayo, with two representatives on the Senior Council, and one on the Junior Council.”  As part of their efforts to promote football in the west, the IFA honoured the district by selecting Enniskillen as the venue for the Irish Junior Cup Final of 1908.

While those early meetings were covered in the press, unfortunately no minute books survive from the period, so that records of the various competitions are incomplete.  Teams from Sligo, Clones and Cavan were successful in those early days, but it is not clear if any competitive football was played during the Great War.

Nine teams, all relatively local, including Enniskillen Comrades and Irvinestown Wanderers, participated in the 1919-1920 season, and throughout the Twenties and Thirties, Enniskillen Corinthians were the dominant club, with strong opposition from the army teams from Omagh Depot, and from Great Northern Railway, Enniskillen.

During the Second World War, perhaps not surprisingly, football declined to such an extent that only five teams took part in the 1939-40 season.  The lack of teams was, however, adequately compensated for by the number of English League and international stars who were stationed here in the army and air force.  The most notable was the Chelsea forward Joe Payne who with Luton Town scored ten goals in an English league game, a record which still stands.  Irish internationals David “Boy” Martin and Jimmy Kelly were among the big names who turned out during a period when Forces’ teams regularly won the Mercer and Mulhern Cups.

The slump continued into the Fifties and only five teams competed in the1949-1950 season, but the end of the decade saw a resurgence as the Fermanagh and Western had its greatest triumph up to that time: in 1958 Enniskillen Corinthians won the Irish Junior Cup defeating Clooney Rovers in Portadown.

In the sixties the number of clubs grew rapidly, from six in 1960 to twenty-one by 1968.  This necessitated the formation of a second division for the first time, and the rise in numbers can be attributed in no small way to the sterling work in promoting the game by Brendan Keogh, the Honorary Secretary.  During the Sixties, Seventies and Eighties clubs such as Enniskillen Rangers, Lisbellaw United and Shelbourne enjoyed great success at local level, and increasingly at national level, with Lisbellaw United becoming the second Fermanagh and Western club to lift the Irish Junior Cup in 1978.

The League continued to expand.  A Third Division was started in 1972, and a Fourth Division became necessary at times during from this period.  Eventually, in 1998, a restructuring led to the creation of three Reserve Divisions, so that by the time the Centenary Season arrived, there were in all six Divisions, with thirty-six different clubs, fielding over eighty teams.

It was inevitable that, with the Fermanagh and Western League offering only Junior football, some clubs would wish to play at a higher level, and thus we have seen Ballinamallard United, Dergview and Fivemiletown United making great strides as they progressed to Intermediate level.  Omagh Town F C, though strictly speaking a club which affiliated to the North West Divisional Association, played at the highest level, and even competed in European competitions. The ambitions of these clubs have brought many benefits, and Ballinamallard United can count an Irish Intermediate Cup won in 1995 in their list of successes.  They have also shown great foresight in their provision for youth so that they have twice brought the Irish Youth Cup back to Ferney Park, in 2002 and 2006.

The responsibility for Youth Football in the area has been taken on by the highly successful Brendan Keogh Youth League, which has provided a platform for so many young boys and girls to go on to represent their country at international level.

At Senior International level, Fermanagh and Western fans can now follow the fortunes of the Northern Ireland team with greater interest than ever.  There are currently no fewer than three players in the squad, and at one time during the away game against Finland in 2006, the three – Roy Carroll, Ivan Sproule and Kyle Lafferty - were on the field.  As all three started their footballing careers in the Fermanagh and Western football League before making it to the highest international stage, it is evident that the football in this area has also made enormous progress in the one hundred and twenty years since “a game of football under the Association Rules” was first played here.

As the Fermanagh and Western Football Association sets out on its second hundred years, it is fascinating to reflect on the first century, to browse through the incomplete archives, and hope for similar progress in the future.